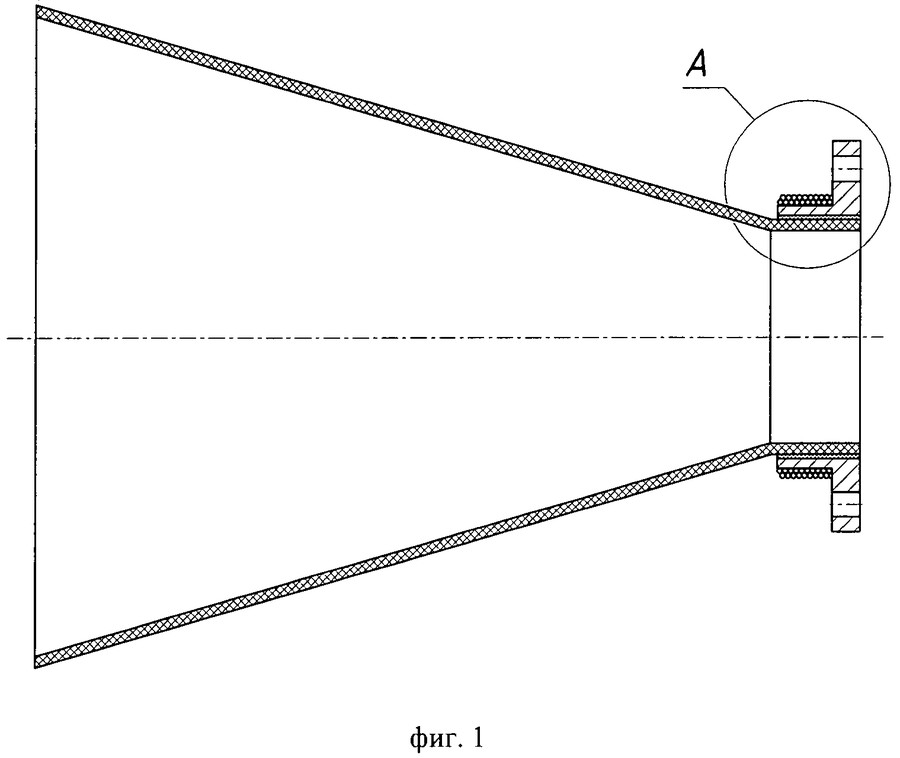 1. Purpose: Horn emitter (HE) of electromagnetic waves with ultra high frequencies (UHF) and combined form of walls belongs to radio electronics, in particular, to radio systems and devices of UHF range, as well as to radar systems, radio direction finding. It can be used in receiving and transmitting antenna paths of radio informational communication systems.

2. Main characteristics, gist of development. HE with UHF and combined form of walls (HE) is a segment of a rectangular waveguide with a wide, expanding wall. The size of a narrow wall along the entire length of HE remain unchanged. The width of the wall changes non - linearly under two different laws. It minimizes coefficients of reflection (CR) and harmonics (CR). Due to low CR in a given range of operating frequencies HE has high ECE (Energy conversion efficiency), and due to low CR almost all energy of UHF is emitted into the space in the form of the main wave. Due to this parasitic waves of higher types are humbled, which leads to a narrowing of the radiation pattern (RP (Radiation pattern)) HE and reduction the level of it's sidelobes. HE meets the requirements of low material capacity and cost, provides mechanical strength and stability of parameters.

3. Patent - competitive characteristics.
Technical and economical characteristics HE with combined form of walls make it competitive on the world market for products of similar designation. A number of technical solutions are protected by patents.

4. Comparison with worldwide analogs.
Advantages of the developed HE are high electrodynamic parameters, reliability, and technological design.

5. Economical characteristics.
The peculiarity of this design is a simple technology for its manufacture, which does not require expensive equipment, materials and capacities. HE does not require labor - intensive service. Therefore its usage as a part of radar systems and as an integral part of antenna complexes can have a substantive economic effect. Estimated cost of a single HE is not more than $20 USA, which allows to return money in a short time, spent on its development and production.

7. The state of development.
An experimental sample was produced.