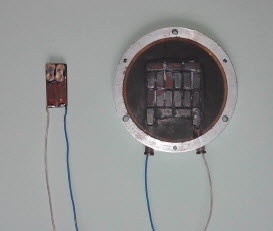 Main characteristics of development
New thermoelectric materials are offered on the basis of intermetallic semiconductors of structural type MgAgAs. These materials provide a force factor of about 30 μW (K2 ∙ cm) at 300 K and a thermoelectric power of more than 350 μV / K at 400 K

Main advantages of development
An essential advantage of the materials developed is the simple method of synthesis (electric arc welding), as well as the relative cheapness and non - toxicity of the original components. Modification of the component composition of such semiconductors leads to improved thermoelectric characteristics.

Material for thermocouples and thermoelectric generators PP125 in other languages