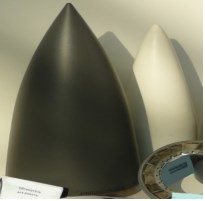 The development concerns the increase of the efficiency of mechanical processing - diamond grinding of thin - walled products of complex spatial shape such as missile radomes  and aircraft from hard - working fragile nonmetallic materials, incl. a new progressive material of Sit - Ceramica CS - 418

The essence of the development

Development of the possibility of efficient processing of new materials such as Sitall - ceramics CS - 418, which has a higher tactical and technical performance than previously used for these whole Sitals and quartz ceramics with more favorable processing. Sitall - cerimics due to the features of composition and structure allows: to reduce the cost of blanks by up to 30% and optimize the machining parameters to ensure that the formed defective layer and the level of  the product water absorption  material are reduced. As a result, the radio technical characteristics are significantly increased. The developed technology, including the method of controlling the defective layer of the material treated with the CS - 418, is capable of reducing the cost of missile radomes production by 25% .

3 patents of Ukraine were received

The developed technology can be used at enterprises engaged in the processing of products from structural nonmetallic fragile materials. Potential users of this technology are enterprises that manufacture missile radomes.

The state of development

The technology of mechanical processing of small - sized radomes of complex spatial shape from sitall - ceramics CS - 418 has been tested in the conditions of industrial production at the release of a pilot batch of missile radomes with a positive expected annual economic effect.