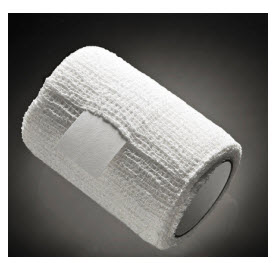 The development can be used for hemostasia from vessels of different diameters both in wartime wounds or in emergency situations. It can also be used during planned operational intervention in surgery, traumatology, midwifery and gynecology

ESSENCE OF THE DEVELOPMENT

The essence of the development is to form a multi - layer gauze bandage. It contains the active substance chitosan in its composition. The inclusion of chitosan in different rations and forms makes it possible to significantly increase the efficiency of arterial bleeding control from macrovessels (femoral and brachial arteries) in comparison with the traditional devices, which are registered in Ukraine. The additionally developed tool has an antibacterial effect. It makes possible to reduce the frequency of purulent infectious complications

The use of chitosan bandage allows to reduce the time of massive bleeding control by 2 times. At the time the blood loss dimension, when using a lyophilized sponge, is reduced by 2, 9 times, bandages with chitosan – by 10 times. Other advantages: easy production, low cost of components, easy to use

Received a patent of Ukraine for the invention

Prototypes are created and tested

Tools for hemostasia PP247 in other languages

Bandage on elbow in USA